Desktop-Only Content: This information applies only to the Desktop version of Terraria.
Plaguebringer's set 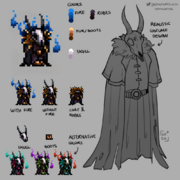 Crafting the set requires materials that can only be found in the Crimson. Its Corruption counterpart is the Timeless Traveler's set.

As of 1.4.0.1, it is possible for the player to create an artificial Crimson biome in a Corrupt world by purchasing Crimson Seeds from the Dryad in a graveyard during Hardmode to get the materials necessary to make this set.

When the full set is worn, it displays a special set animation of Cursed Flames emitting from it. The color of the flames will change according to the dye applied to the cloak.