Plantera's Bulb is an object found in the Underground Jungle which can be destroyed with a Pickaxe. When destroyed, it summons Plantera.

In a Hardmode world, after killing all three mechanical bosses (The Twins, The Destroyer, and Skeletron Prime) at least once, the bulbs will spawn somewhere in the Underground Jungle. They can be destroyed with a pickaxe. Upon doing so, Plantera will be spawned. The bulbs give off a glowing particle effect, which helps to locate it. On the minimap, the bulbs are light pink in color. This can sometimes be confused with Pots or Heart Crystals. Multiple bulbs can be found in the same Underground Jungle. If there is a plant or piece of vegetation in the way of a bulb's spawn, the bulb will replace it.

Because some of the most valuable Plantera drops are incredibly rare, bulb "farms" are very common. They are made by digging long tunnels of mud on top of one another in an Underground Jungle in order to create space for the bulbs to spawn. The player then uses the map to spot the bulbs and is able to easily break them and fight Plantera. Due to the structure of the tunnels it is very easy to fight Plantera because the player simply has to run along the tunnel damaging the boss in order to get the kill. Generally, the more tunnels the player digs the faster Plantera's bulbs spawn. It is also important to note that the spawn of vegetation in the tunnels does not affect the spawn rate of the bulbs, so it is unnecessary to clear bushes and other jungle life out of the "farms". 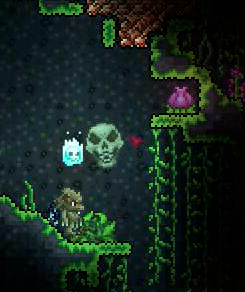 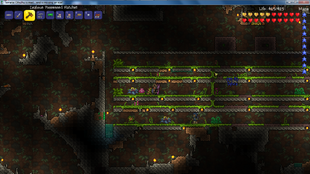 A bulb spawns in player's farm in multiplayer 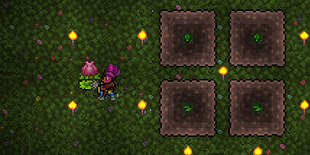 Plantera's Bulb near a Chlorophyte Farm 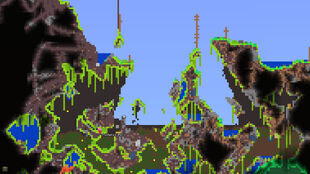 A bulb spawned near to the surface 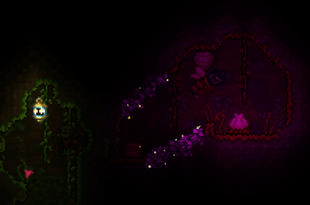 2 hours later and finaly found it 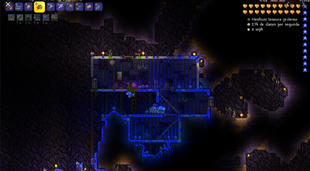 Retrieved from "https://terraria.fandom.com/wiki/Plantera%27s_Bulb?oldid=606448"
Community content is available under CC-BY-SA unless otherwise noted.