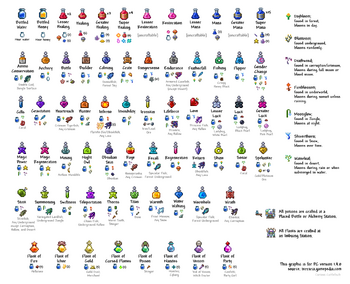 Potions are a group of consumable items that either recover health and/or mana or grant temporary buffs or debuffs. Potions are commonly found in natural chests and Pots and can be dropped by enemies, purchased from NPCs, or crafted. Most potions can be crafted at a Placed Bottle or Alchemy Table, but flasks must be crafted at an Imbuing Station. Potion buffs can be canceled at any time by right-clicking the buff icon (

), by selecting the buff icon and canceling it in the equipment menu (

), by double-tapping the buff icon (

), or by canceling the buff from the buffs screen (

). All Potions require 20 to unlock duplication, but 30 are needed for recovery potions.

Consuming foods will grant a Well Fed, Plenty Satisfied, or Exquisitely Stuffed buff, while drinks will grant the Tipsy effect.

These grant the character a temporary, usually short-lived buff when consumed. They are crafted at a Placed Bottle or an Alchemy Table.

Pressing the buff key (Quick Buff by default) will consume one of each of the player's buff potions in their inventory.

These grant the character a temporary melee and whips-specific buff when consumed. Only one flask buff can be active at a time. Crafted at an Imbuing Station.

These are potions that do not fit in the other categories.