3DS-Only Content: This information applies only to the 3DS version of Terraria.

Unobtainable
The item(s) or effects described on this page exist as functional game items, but cannot be acquired through normal gameplay.

It has been suggested that this page/section be rewritten. [discuss]
Reason: "Needs an overhaul, because I think the unobtainability of the classic presents and these ones have swapped as of Mobile 1.3.0.7"
Present (furniture) 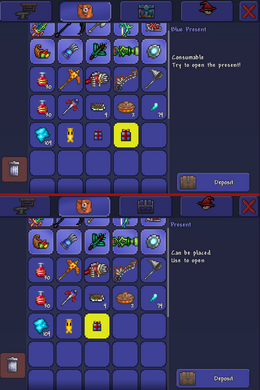 A comparison of a normal Blue Present and this Present.

These Presents are furniture which were dropped by Present Mimics during Christmas. Once placed, it is invisible (possibly due to a lack of an actual placed Present in the game) and normal Present loot is dropped directly on the player (like normal Presents).