The Razorblade Typhoon is a Spell dropped by Duke Fishron. It is similar in terms of casting to the Magnet Sphere but instead of a slow projectile that continuously fires at enemies with beams, it shoots high velocity blue razorwheels that both home in on enemies and bounce a few times. The homing aspect of this weapon is especially handy as the player won't even have to aim at their enemy. This spell is best used against segmented enemies like Destroyer or Wyverns because as the razorwheels bounce around the one body part that they homed in on, which will allow them to hit multiple others. The razorwheel is not limited to a specific number of bounces, rather, it is limited to a set duration of about 3 seconds when cast and multiple wheels can be out at the same time. 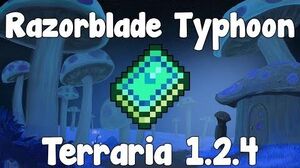 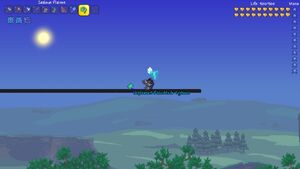 Unpleasant Razorblade Typhoon on the ground
Add a photo to this gallery
Retrieved from "https://terraria.fandom.com/wiki/Razorblade_Typhoon?oldid=590306"
Community content is available under CC-BY-SA unless otherwise noted.