Desktop-Only Content: This information applies only to the Desktop version of Terraria.

Resource Packs are add-on files which allow players to customize the game's sprites, music and translation. 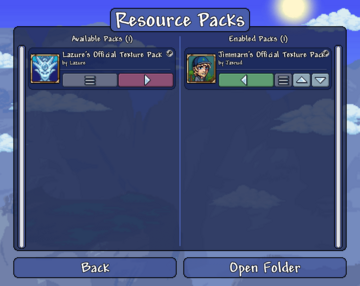 Resource Packs can be installed by either being placed in the ResourcePacks folder, or by being downloaded from the Steam Workshop, where they will be installed and updated automatically.

The ResourcePacks folder can be accessed by pressing the "Open Folder" option in the Resource Packs menu in-game. This folder is generated when the game is launched.

Installed Resource Packs can be enabled from the Workshop Hub or by selecting the "Resource Packs" option on the main menu, where they can be moved between "Available Packs" and "Enabled Packs".

Images are placed inside the Content/Images folder of the Resource Pack. They must share the same file name (albeit with a png extension) and canvas dimensions as the default images. The default Terraria images can be located here:

These default images are stored with the xnb file extension. TConvert can be used to extract the default xnb images as png files for viewing, editing, and saving.

Music files are placed inside the Content/Music folder of the Resource Pack. They can be in either wav, mp3 or ogg format.

Localization files are placed inside the Content/Localization folder of the Resource Pack. They can be in either a csv or json format.