Creates a magical orb of light

The Shadow Orb (Spell) is a summon-type spell, which has a 20% (1/5) chance to be dropped from breaking Shadow Orbs found in the Corruption . When summoned, the Orb will follow the player around and project light in a manner similar to the Fairy Bell or Wisp in a Bottle. It can also travel through blocks.

However, the summoned orb has low acceleration and a slow top speed, so it often falls behind, especially when the player falls a long distance or otherwise travels at a fast speed (such as when using the Hermes/Spectre Boots). If it falls too far behind, it will warp to the player's location.

The Shadow Orb compared with the Fairy Bell. 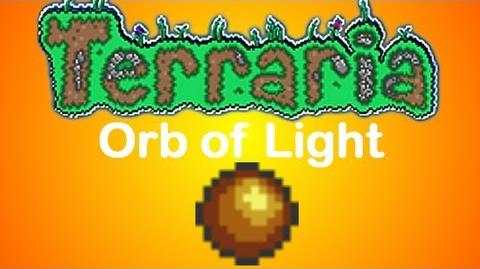 Terraria Orb of Light
Add a photo to this gallery
Retrieved from "https://terraria.fandom.com/wiki/Shadow_Orb_(Spell)?oldid=596307"
Community content is available under CC-BY-SA unless otherwise noted.