This can be seen as an alternative to the former Magic Dagger, as it have an autoreuse property and deals melee damage (therefore does not use up mana) at the expense of a slight lower base damage. This, however, is compensated by the ability to inflict a DoT debuff on their targets.

As a melee weapon, the Shadowflame Knife benefits from Flasks and the Frost Armor bonuses, allowing the player to stack different debuffs to be applied with every attack (i.e Shadowflame + Cursed Inferno).

If you combine this weapon with the Flask of Cursed Flames, Magma Stone/Fire Gauntlet and the Full set of Frost Armor, you can inflict four debuffs at once! (Shadowflame, Cursed Inferno, Frostburn and On Fire!). Combining the damage of all debuffs together accounts for 33 damage every second.

Overall, this and the Magic Dagger are similiar weapons, both of them being available at the early stages of the Hardmode (Mimics can be easily found underground, and the Goblin Invasion is common and may happen right after killing the Wall of Flesh.) and having a similiar mechanics. However, the piercing ability of the Magic Dagger allows it to be used as a crowd control, whereas the high damage-over-time capability of the Shadowflame Knife renders it better suited for individual combat and to take down stronger foes. Can be a somewhat efficient weapon against the Destroyer thanks to it's bouncing property.

The best prefix for this weapon is Godly. 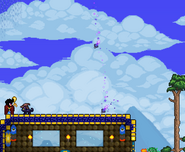 Two Shadowflame Knives in use. 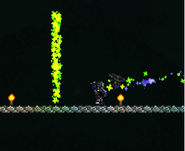 Shadowflames imbued with the Flask of Cursed Flames.
Add a photo to this gallery

Retrieved from "https://terraria.fandom.com/wiki/Shadowflame_Knife?oldid=599653"
Community content is available under CC-BY-SA unless otherwise noted.