Silver armor is an armor set crafted from Silver Bars. Crafting the entire set requires a total of

It consists of the Silver Helmet, Silver Chainmail, and Silver Greaves.

The individual Silver armor pieces grant a total of 10 defense. Wearing a full set additionally grants a set bonus of 3 defense, for a grand total of 13 defense.

Replacing the Silver Greaves with the Boots of Ostara

will still grant the set bonus of 3 defense. The Boots of Ostara will also, when placed on a mannequin, become Silver Greaves. 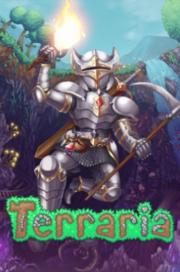 Silver armor as depicted in the Steam version's cover art.