The Snow Biome is a type of Biome that was released in the first Christmas update (1.1.1). It is completely made up of Snow Blocks, Ice Blocks and Slush Blocks. Ice Blocks also appear on the top of water. 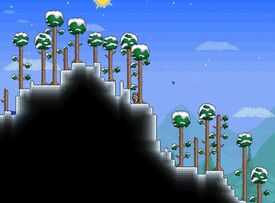 When the player is in a snowy biome, as a cosmetic effect, snowflakes will fall from the sky (even indoors or underground), also; trees generated or planted in this biome will appear covered in snow.

In 1.2, this biome has much more content, several new monsters were added, and an Underground Snow Biome was added. On the surface, players will find Ice Slimes, Zombie Eskimos (at night), and Ice Golems (after Hard Mode, during rain/blizzards). Underground, players will find the Cyan Beetle (used to make dye), the Ice Bat, the Spiked Ice Slime, the Snow Flinx, and the Undead Viking. Also, players can find Ice Chests with unique snow items, like the Ice Skates. There is also a thin ice that covers the water, which breaks when landed on from a great height, which can also appear in caves, covering an entire cave with breakable ice.

Any Acorns planted in snow will grow into trees that produce Boreal Wood when cut down.

Even in worlds where this biome hasn't been generated it is possible to create it artificially by placing Snow Blocks or using a Snow Globe to summon the Frost Legion, that will leave a trail of snow during the battle.

Retrieved from "https://terraria.fandom.com/wiki/Snow_Biome?oldid=583588"
Community content is available under CC-BY-SA unless otherwise noted.