Desktop/Console/Mobile-Only Content: This information applies only to the Desktop, Console, and Mobile versions of Terraria.
Stardust armor

The attack of the Stardust Guardian on

Stardust armor is a post-Moon Lord set of armor that provides summon weapon boosts. It is currently the final summoner set available on the

Mobile version. Crafting the full set requires a total of 36 Luminite Bars (144 Luminite) and 45 Stardust Fragments. Wearing the full set increases the wearer's minion capacity by 5 (to a total of 6), along with granting +66% minion damage.

Equipping a full set of Stardust armor causes a unique Stardust Guardian minion to follow the wearer, which does not count against the player's minion capacity. Its function differs across versions:

A player with Stardust armor and a Stardust Guardian. 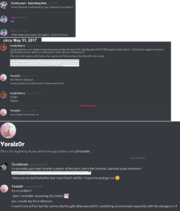 Developer comments on the origin of the Stardust Guardian. Click/tap to enlarge.