Steam Trading Cards were added to Terraria on 7/15/2013, shortly before the 1.2 update. These cards will automatically be awarded while playing the game, assuming the player bought the Steam version of the game. Players will receive up to four cards while playing. After that, it is possible to obtain more cards from booster packs, which are randomly given or by buying them from other players. There is also the special Foil variant, which are rarer, but have no other benefit.

For more information about Steam Trading Cards, visit the Steam website and the FAQ.

There are a total of nine trading cards:

There are five levels of badges. Each time the player crafts it, the level will increase by one. There is also a Foil badge, which can only be obtained by using Foil Trading Cards. 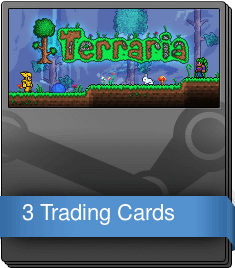 Emoticons can be crafted with Trading Cards and can be used by typing the name in the chat.

There are five different backgrounds, which can be crafted with Trading Cards.