From Terraria Wiki
Jump to: navigation, search
Not to be confused with Summoning items.
For a sortable list of all available summon weapons, along with their stats for comparison, see List of summon weapons.

Summon weapons are a type of weapon that spawns secondary characters that will aid the player during battle by automatically attacking enemies within range. They cannot be hurt or killed, and deal summon damage.

Most summon weapons fall into one of three categories: Minions, Sentries, and Whips. Minions are mobile characters that follow the player, while sentries remain stationary. Additionally, the set bonuses of the Stardust armor, Chlorophyte armor, and Forbidden armor will summon an entity to fight for the player in a manner similar to minions.

Whips are related weapons that deal summon damage without summoning any minions. Hitting an enemy with a whip causes a player's minions and sentries to target it immediately. Some whips have bonus effects which can be activated by minions, but not by sentries.

There are currently 26 summon weapons on the

Desktop version, 25 on the

Mobile version, 19 on the

Console version, 11 on the

Old-gen console version, and 5 on the 3DS 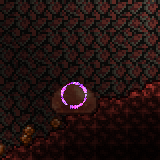 Minions are mobile characters. They follow the player indefinitely until the player dies, summons a replacement minion, manually cancels their buff, or exits the world. There are several different minions available, some of which can walk or fly, and attack using melee or ranged means. A minion costs mana to summon initially, but follows the player indefinitely thereafter at no further cost.

Minions provide an ongoing source of damage against enemies which requires little or no attention from the player. The common limit of all minions is that each has a limited rate of attack and damage, but the different types also have various limits to their movement and/or attacks.

Minions follow players in a manner similar to Pets, flying and passing through blocks as necessary to keep pace with the player's movements, though most cannot move through blocks for the purposes of attacking. Exceptions are the minions summoned by the Tempest Staff, Xeno Staff, Desert Tiger Staff, Stardust Dragon Staff, and Terraprisma, which can attack through blocks.

Mobile version, it is possible to press ⚷ Open / Activate with a minion summoning item. This will direct the respective minion to target the entity nearest to the cursor. As long as the minions have their target within their line of sight, they will specifically attack it. The targeted enemy will show swirling purple particles which will trail behind a moving enemy, or circle in front of a stationary one (see images).

By default, a player can only have a single minion summoned at once. Various boosts can raise the player's minion capacity ("slots"), allowing multiple simultaneous minions. With minion cap boosts in effect, the same minion can be summoned multiple times, or several different Minions can be summoned. Minion cap boosts do not affect pets or light pets. If the minion cap later drops below the number of minions in use, minions are randomly chosen and dismissed until the number of minions is below the current cap. Minions vanish when their player leaves the world, and are not re-summoned when the player re-enters that or another world.

The Spider Staff (On the

Sentries are stationary characters. Unlike minions, sentries do not follow the player, and will instead remain rooted in place. In normal use, sentries will last for a fixed two minutes before vanishing; unlike minions, they can persist even after their owner dies. (But see "Tavernkeep's sentries" below for their special use in the Old One's Army event.)

By default, a player can only have a single sentry summoned at once. Tavernkeep armor and Old One's Army accessories (see below) can raise the player's sentry capacity, allowing multiple simultaneous sentries. Note that these accessories do not stack with each other, so the maximum sentry limit is 5: 1 by default, +1 from an accessory, and +3 from armor. With sentry cap boosts in effect, the same sentry can be summoned multiple times, or several different sentries can be summoned. On the

version, the player is limited to only summoning one of each sentry type, with no way to raise the cap.

A waiting sentry goes into a reuse cooldown after attacking, before it can try to attack again. This cooldown is bypassed initially on summoning, which can dramatically increase sentry attack speed at the cost of greater mana expense. Since sentries do not suffer from Mana Sickness, this can be a viable way to deliver high damage at long range when using a sentry that attacks instantly.

Whips are unlike other Summon weapons, and instead act more like a traditional weapon. When used, whips will perform a normal attack which costs no mana, swiping in a wide cone towards the cursor or wherever aimed. Whips deal Summon damage, and as such cannot deal a critical hit. All whips can pierce infinitely in their range, but will deal progressively less damage to each additional enemy they hit, until they start dealing 1 damage. Whips all vary in size as well. The severity of damage loss from piercing and the size of whips typically goes down and up, respectively, as whips get stronger.

A feature of whips is how they make minions and summons target the enemy hit, the same way that other Summoning weapons can target enemies. Whips can only target enemies by hitting them, unlike those other Summon weapons. The enemy targeted will always be the last enemy hit by the whip, usually the furthest enemy away from the player that gets hit.

These two debuffs are also universal; even universally immune enemies like The Destroyer can be affected by whip debuffs. The buffs that whips have are mostly boosts to Melee speed, which get progressively more potent for stronger, later whips. These Melee speed buffs aren't exclusive to the whips that grant them, and will actually affect not only other whips, but also Melee weapons in general. Cool Whip currently features the only buff that doesn't affect Melee speed; its buff creates a damaging projectile that lasts for 3 seconds after the last time the whip hit something.

Sentries summoned by items from the Tavernkeep are associated with the Old One's Army event. They are purchased with Defender Medals (instead of coins), which are awarded only during the event. At first, they can only be used within the event, where they will remain placed until the end of the event. Each sentry summoned will cost 10 Etherian Mana; at the beginning of the event, the player immediately gets the 10 Etherian Mana for their first sentry, and can collect more as they kill enemies. Sentries summoned with Etherian Mana are not subject to sentry limits (see above). Other sentries can be used in the event, but will have their usual mana cost, duration, and sentry limits.

Each of the Tavernkeep's sentry summon weapons come in three tiers: Rod, Cane, and Staff; with the Staff being the most expensive and the most powerful. The Tavernkeep's various armor sets each enhance one of his four sentry types; see his article for full details.

After the event is completed once, these can be used outside the event, and will then function as normal sentries, costing ordinary mana to summon (5 points per tier) and lasting the usual two minutes. Etherian Mana cannot be used outside the event, so the usual sentry limits apply: By default only one sentry can be summoned at once, but armor sold by the Tavernkeep, and accessories dropped by event bosses such as Ogres, can raise a player's sentry limit. This limit increase does include non-Tavernkeep sentries such as the Queen Spider. Again, the accessories do not stack with each other.

Certain armor sets will summon a unique minion when the full set is worn:

Additionally, any accessories which boost melee speed also boost whip speed, and the autoswing property of Feral Claws and its upgrades applies to whips. There are some melee accessories which have small boosts only to whips, not to the summons themselves.

You and What Army? • “Command nine summoned minions simultaneously.”
Have nine minions summoned at the same time.

It has been suggested that this page/section be rewritten. [discuss]
Reason: "Reword second-person"

It has been suggested that this page/section be rewritten. [discuss]
Reason: "Reword second-person"

The maximum possible minion capacity is 11. It requires equipping Stardust Armor that also gives you a Stardust Guardian, and the Papyrus Scarab, Necromantic Scroll, and Pygmy Necklace accessories. It also requires being under the temporary effects of the Summoning Potion and the Bewitching Table.

Damage bonuses only need to be active while actually summoning the minions. This allows summoning some minions at maximum damage, and then unequipping some of the damage bonus for limit increases, to summon more minions at slightly lower damage.

Update 1.4.0.1 changes the damage bonus to be calculated concurrently, meaning any damage bonus that is removed while a minion is active will be removed from the minion. Thus, the following loadout is no longer useful as a "setup" procedure, though it remains a powerful summoner build.

A Ruthless modifier on the minion-summoning staff yields +18% up front.

Other modifiers can be maximized as follows:

To achieve "maximum minion power" in single-player, follow the following procedure. (auto-pause will help a lot; comments about extra spiders should be ignored as of 1.4.):