The Corruption is a hazardous biome in Terraria. It has a 50% chance of generating or being replaced by The Crimson with (generally up to three, or if on mobile, two) random locations.

While the player is present in the Corruption, music "Corruption" will play. (Eerie if on old versions, or Underground Corruption if underground).

The Corruption is a dangerous and dark place, it is recognized by its background with violet mountains, dead trees, purple grass and darker lighting than other biomes, and is the only biome in which one can find Chasms, Ebonstone, Shadow Orbs, and Vile Mushrooms.

Initially, the Corruption can spread to regular grass from corrupted grass so long as the blocks are adjacent. Corrupted grass will also occasionally produce thorns that deal 10 damage and grow indefinitely so long as they are within four blocks of another block.

The monsters found in this biome at any time of day are relatively strong and are thus a good reason to avoid the Corruption at the beginning of the game. Most monsters appear to be worms as well as the boss. 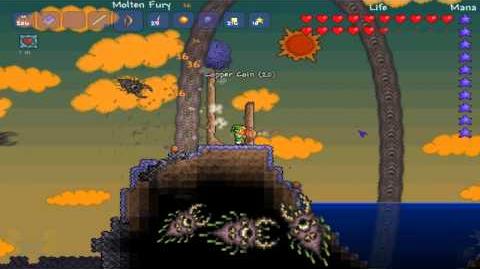 Monsters found in The Corruption:

After the Wall of Flesh is defeated in a World, the Corruption begins to spread at twice the normal speed, gains the ability to spread over sand and stone as well as turning mud into Dirt Blocks with corrupted grass, and it becomes able to spread across gaps of "incorruptible" material up to two blocks long. Finally, all monsters slain in the Underground Corruption will have a chance of dropping a Soul of Night. When fishing in the Corruption, it is now possible to catch the Toxikarp. 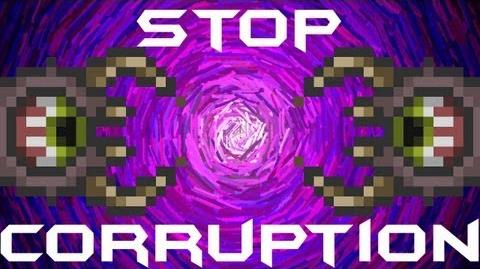 The best and cheapest way is simply by digging a horizontal hole, 6 blocks wide, 3 blocks deep and filling it with any non-biome affected blocks that cannot be bypassed/corrupted (or hallowed). Examples of blocks: dungeon bricks, ores, bricks, clay, ash, silt, or blocks that are acquired through crafting(most of them). This method works on ALL biomes and only takes 18 blocks per hole. The Corruption and Hallow cannot spread through clay, bricks, silt, or ash so you can use those materials to your advantage like making a barrier around your base. Sunflowers will also stop The Corruption from spreading pre-Hard Mode.

Another way is to cure the Corruption before defeating the Wall of Flesh, eliminating the preventatives needed to protect your base. However this is a rather hard alternative as, although it has the best results, it is time- and money-wasting, for little or no profit. Also, as the Hardmode spawns more Corruption when you break the Demon Altars, the original biome is not as worth clearing.

Another method is to spread the Hallow on both sides of your house, as neither the Corruption nor the Hallow can spread across the other. However, hallowed monsters will still spawn which can be an annoyance.

A quick (depends on size) but expensive way to clear the Corruption is by simply blowing it up (with any kind of block destroying Explosives). However, this is very expensive (unless the player has access to a Bomb Statue) and will leave a very big hole, therefore not recommended.

Another (potentially expensive) way to clear the Corruption is to use the Clentaminator to convert corrupted blocks to normal dirt and stone or Hallowed dirt and stone. The Clentaminator uses various colored solutions as ammo, all of which need to be purchased and cannot be crafted. Clentaminate everything, since biomes do spread. Preserving some of the biome is a good idea since sometimes you WILL need that biome (for a boss battle, a Vile Mushroom farm, etc).

However, if the player has a jungle biome blocking the corruption from their home, the corruption will not spread on mud. Therefore, they are safe from corruption problems until hardmode, in which the player will have to switch to non-biome affected defenses.

A rare occurrence; in a Corruption cave, some Ebonstone created a spotty pattern on the back wall.

An instance where the corruption is generated, "awkwardly".

A very rare instance where the corruption cuts into the Dungeon

A fully-blown up corruption biome in pre-hardmode.
Add a photo to this gallery
Retrieved from "https://terraria.fandom.com/wiki/The_Corruption?oldid=606809"
Community content is available under CC-BY-SA unless otherwise noted.