The Horseman's Blade is a sword that is dropped by the Pumpking, a boss monster who appears during the Pumpkin Moon event. When an enemy is hit, (doesn't work on players) a homing pumpkin head will come into the screen from one of the four corners. It is (with the homing pumpkin heads) the highest melee DPS possible to be attained, as it will ravage bosses very quickly. It can be seen as an upgrade to the Bee Keeper. 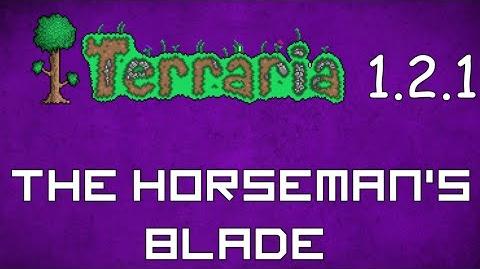 A swarm of homing pumpkins with the use of statues.

Horseman's Blade with Legendary prefix.
Add a photo to this gallery

Retrieved from "https://terraria.fandom.com/wiki/The_Horseman%27s_Blade?oldid=597113"
Community content is available under CC-BY-SA unless otherwise noted.