The Underworld, also known as Hell, is the bottommost Biome in the game, reached by digging past the Stone Layer. The Underworld can easily be differentiated from other biomes due to the background wall changing to a lava vein pattern.

The Underworld contains mostly intact buildings called Underworld Houses, which may contain Pots, Hellforges, and any kind of chest. Prior to 1.2, these houses were frequently very damaged or partially complete. The Underworld is the only biome where Hellstone, Ash Blocks, Hellforges, Fireblossoms, and Shadow Chests may be found. Healing Potions can be found in Pots instead of the Lesser Healing Potions that tend to be found in other areas. Additionally, it contains stronger enemies than most other pre-hardmode biomes.

Early game, you will find that as you explore caves deeper and deeper, you will eventually hit The Underworld. This, however, is not very effective as if you wish to frequently revisit The Underworld; it may take 5-10 minutes traversing the caves to reach the Underworld.

Once you have the time and resources, it is well worth the time to make a Hellevator. This is essentially a 2 block wide hole that goes all the way down to The Underworld, allowing you to jump in and wait as you fall all the way down.

Note: If you don't have a fall damage negating item such as Wings or a Lucky Horseshoe, make sure to place a few blocks of water at the bottom so as that you don't take any fall damage.

While it is debatable whether it is worth the time and money, a Teleporter from your house to The Underworld is by far the fastest way to get down there. However, depending on the world size, this can cost several platinum coins.

There are several items that are highly recommended to bring whenever you visit The Underworld.

The only ore available in the Underworld is Hellstone, which is used to create Molten Armor and other molten items, which is the highest tier of armor and tools available before activating Hard Mode. Upon contact with Hellstone ore, the player will receive fire damage, which can only be prevented by equipping an Obsidian accessory, like the Skull, Horseshoe, Shield or Water Walking Boots (the latter three are created by tinkering the original items with the Obsidian Skull at a Tinkerer's Workshop).

The most important thing to note is that mining Hellstone will spawn approximately half a tile of lava for every block mined out. As such, it is advisable to always keep at least a one-block-thick wall of blocks between oneself and the ore being mined. Ash Blocks are found abundantly throughout the Underworld and will serve very well for this purpose. If attempting to mine around smaller lava pockets, it is best to dig out additional sections in order to cause the lava to flow elsewhere, out of the way, rather than attempting to tunnel through it in any fashion.

Always keep at least a one-block-thick wall between oneself and any lava pockets or ore deposits being mined to avoid being surprised by a sudden lava flow, and ending up dead.

Two Heart Crystals in the Underworld

Eater of Souls in the Underworld.

Water in the Underworld (no hacks/cheats) 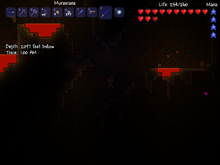 Two heart crystals next to each other
Add a photo to this gallery
Retrieved from "https://terraria.fandom.com/wiki/The_Underworld?oldid=404043"
Community content is available under CC-BY-SA unless otherwise noted.