Mythril Anvil
Orichalcum Anvil
The Tonbogiri is a 3DS exclusive Spear that does 50 melee damage, has very fast use speed/time, strong knockback, tier 5 rarity, is crafted at a mythril anvil, and sells for 40 gold. Requiring 1 Gungnir, 15 Adamantite Bars, and 15 Soul of Blight, this spear is very expensive. Before 1.2, it was a light blue recolour of the Gungnir. 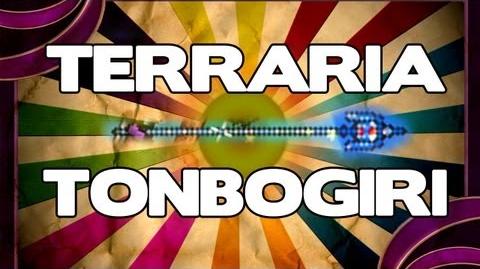 Retrieved from "https://terraria.fandom.com/wiki/Tonbogiri?oldid=598855"
Community content is available under CC-BY-SA unless otherwise noted.