Traps are placed items that cause harm to players and enemies. Most are mechanisms that are naturally generated underground and below. When found initially, they are wired to triggers, such as Pressure Plates, intended to harm players who inadvertently activate them. Traps can be collected by players and utilized in arenas, and are usually essential to battling events like the Pumpkin Moon and Frost Moon.

The Spike and Wooden Spike are exceptions, as they are not mechanisms, but static placed items that simply cause damage on contact. The Land Mine is a trap-like item, though never generates naturally, and is instead purchasable during Hardmode.

All traps, including their triggers, are illuminated by the Dangersense buff, allowing the player to avoid and collect them. Their wiring can also be seen if the player holds a mechanism-related item in their hand, for instance a pressure plate. The player can also see wires even in darkness if they have a Mechanical Lens

Reusable traps generally fire sharp projectiles. They can be activated infinitely with a few seconds delay.

These traps consist of enemy statues wired to a red or green pressure plate. A corresponding enemy to the statue will spawn if a player or enemy steps on the pressure plate. Every enemy around is able to trigger the trap, resulting in swarms of enemies, spawning until the spawn limit is reached. The statue included is either a Slime Statue, Bat Statue, Skeleton Statue or Crab Statue.

Dart Traps fire a poisoned dart which resembles a Wooden Arrow when activated. When found naturally, they are always wired to Pressure Plates in their line of sight. The Pressure Plate can sometimes be very far away from the Dart Trap.

Dart Traps are the most commonly encountered trap, found throughout the Underground and Cavern layers, being the only variety not found in the Jungle Temple. Many can also be found in the Dungeon.

Geysers throw fire that pushes up the player when touched. These do not inflict the On Fire! debuff. The fire they emit can pass through several blocks and still hit the player. They are found deep underground, usually near lava sources.

Super Dart Traps function like ordinary Dart Traps, but do almost double the damage. They shoot what appears to resemble a Poison Dart, as opposed to an arrow. They are only found in the Jungle Temple, and are the second most common trap in there. On the

Spiky Ball Traps drop a single spiky ball that bounces and persists for a long time before despawning. The projectile's prolonged lifetime allows it to do significant damage to anything in its path, which comes in handy for terrain often traversed by enemies. Spiky Ball Traps are found in the Jungle Temple only, and are the most common of the traps in there. On the

Spear Traps deploy a long spear down from the block, which can reach surprisingly far lengths if not obstructed. They have a shorter activation period than other traps. They are found in the Jungle Temple only, and are the second most rare trap in there (only succeeded by Flame Traps). On the

Flame Traps act like horizontal Geysers, and fire flames, similar to those of the Flamethrower, that extend 23 blocks with 1 block above and below, and inflict the On Fire! debuff. They are found in the Jungle Temple only, and are the most rare of the traps in there. Often, they do not even spawn in a world at all. On the

Spikes and Wooden Spikes are not mechanisms, instead dealing damage on contact with a player. They are found commonly in the Dungeon and Jungle Temple, respectively.

Structures are one-use traps which consist of ordinary Blocks that are arranged in a specific way to kill the Player.

Boulder traps feature a Pressure Plate wired to a 2x3 arrangement of Active Stone Blocks above it, with a Boulder resting on top. When the Plate is triggered, the stone blocks become inactive and the Boulder drops on the area below. They are dangerous in dark areas as players won't be able to see the boulder or pressure plate. They affect all entities, so when used properly can be used to defeat enemies and bosses.

Explosive traps come in two varieties, but are based around the same means of killing the player. The more common variant, found only in

Mobile versions, is a Detonator wired to a nearby Explosives block, usually sitting atop a large ore vein. The rarer variant is a less visible Pressure Plate, usually buried nearby. In either case, the triggering device sits within the explosive radius of the block, causing the player to be caught in the explosion though it is possible to activate the Detonator without being caught in the blast radius. There is no forewarning to this explosion, and Explosives deal upwards of 500 damage to entities caught in the blast, making undiscovered Explosives Traps extremely dangerous well into Hardmode. It is also possible to find dummy variations of this trap, where the detonator or pressure plate and large ore vein are present, but not the explosives, or the triggering mechanism is not properly wired to the explosives.

Sand traps consist of a rectangular chunk of sand above a row of actuated hardened sand or sandstone blocks. They are triggered by a pressure plate below and drop the sand onto a player, which then deals suffocation damage.

Lava traps are similar to Boulder traps, having a Pressure Plate wired to a thin column of actuated blocks above it, with a pond of lava resting on top. When the Plate is triggered, the stone blocks become inactive and the lava pours on the area below. These are found in Cavern Layer and the Dungeon.

Spike Pits can be found throughout the Dungeon, and consist of a thick row of Cracked Dungeon Bricks above a large rectangular pit. Surrounding the pit on all sides are spikes, which can quickly deal large amounts of damage. Some of these pits are filled with water, which can make them even more deadly at first, but can later be used for Fishing. 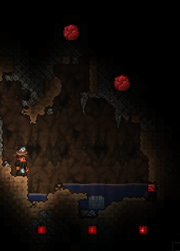 A Dead Man's Chest and its surrounding traps highlighted.

The Dead Man's Chest is a naturally-generating Gold Chest that is rigged with various traps in order to kill the player upon opening the chest. The setup usually includes 3-5 boulder traps, 2-5 dart traps , and 0-3 explosives. It can even have a Geyser or two if located deep enough. The boulder traps are set up above the chest, while the dart traps are setup horizontally, and the explosives hidden underneath. The Dead Man's Chest works identically to the standard Trapped Chests, where once opened, it will send a signal to any wiring connected. To remove the traps, you should have a wire cutter sold by the mechanic to remove the wires connecting the traps.

While only loosely defined as traps, these generate naturally and are intended to inflict damage upon the player as any other trap.

These grow naturally in the Corruption, Crimson and Underground Jungle respectively. Touching them will damage the player and destroy the block.

Upon its destruction, it will fall to the ground and roll to either direction. Soon after, it will break and release Bees that will attack the closest player. It may also release a hornet or two. Though, it will not release bees upon hitting water, and will disappear harmlessly.

Rolling cactus traps are traps similar to boulders that are commonly found in the underground desert. When static, they only deal a little damage to players that make direct contact with them. They will start rolling to either direction after being hit by any tool, weapon, or even projectile. When rolling, they deal large amounts of damage and can bounce off walls. They affect all entities, so when used properly can be used to defeat large waves of enemies and even bosses.

These can only be intentionally put into the world by a player.

The Land Mine is a placed Hardmode item that explodes on contact with a character, or when activated via wire. These do not generate naturally, and are rather purchased from the Demolitionist, and placed by a player.

Watch Your Step! • “Become a victim to a nasty underground trap.”
Get killed by a Trap for the first time.

Dead Men Tell No Tales • “You were so preoccupied with whether or not you could open the chest that you didn't stop to think if you should.”
Die within 10 seconds after opening a Dead Man's Chest.