An Underground House can be found underground within the dirt, dirt-stone and stone layer. The base can be anywhere from -1 altitude, to whatever depth the map transitions to Hell. It always contains some sort of Chest(unless the floor was relocated by a Minecart Track), though the chest may be underneath the actual house. Occasionally, wooden beams are seen below the flooring that extend downwards to the nearest solid block.

It often has, but is not guaranteed to have; Statues, Paintings, Chandeliers, and crafting stations(Such as Workbenchs, Kegs, Anvils, Looms), along with other usually craftable-only furniture, such as Tables, Pianos, and Bookcases. Any furniture found inside is themed based on the location. For example, a house in a Granite biome will have furniture made from Granite. They often have doodads that look like broken furniture. These doodads don't vary by biome, although biome-specific doodads may spawn, such as icicles hanging from ice or vines hanging from jungle grass.

They are also characterized by having a wall of some sort, which can be removed to show whichever background is directly behind it. The solid walls that surround the Underground Houses vary depending on the location of the house, and often include blocks that are the sort of material that makes up the "ground" of the biome. Also any platforms and doors will be themed based on the biome where the house is found. Except for the doodads that look like broken furniture, and uncollectable walls, the materials a house is made of can all be collected and used as raw materials to build a house.

Underground Houses vary in size extensively, but are usually wider than they are tall. Sometimes they are just barely large enough to count as NPC housing(6x13 squares of space inside). Other examples have three rooms, each of which is several times the minimum size for housing.

The Underground house near the surface 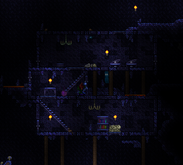 A house above the surface at a grass biome.(Rare)
Add a photo to this gallery

Retrieved from "https://terraria.fandom.com/wiki/Underground_House?oldid=604410"
Community content is available under CC-BY-SA unless otherwise noted.