The Underground Snow Biome is a biome located underneath the regular Snow Biome. This Biome is generated about the same way as the Underground Jungle Biome, except it ends when it reaches lava level. Ice Chests can also be found here and contain snow based items, such as Ice Skates, Ice Blades, and Blizzard in a Bottle. 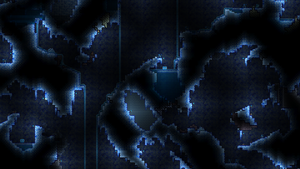 Similar to the dirt layer, the snow layer is just below the surface and contains monsters like Ice Slimes and Zombie Eskimos. Pots will also have a frozen finish to them. Icicles will hang from snow and Ice Blocks.

As you reach this layer, Ice Blocks will be more common, and Slush Blocks will appear in place of Silt Blocks . Different monsters will spawn, such as the Snow Flinx, Undead Viking, and Spiked Ice Slime. Any body of water will be coated with a fine layer of ice and can be broken if jumped on unless you are wearing Ice Skates.

After Hardmode is enabled, new monsters will appear, such as Armored Viking, Icy Merman, Ice Tortoise, and the Ice Elemental. As The Corruption/Crimson/Hallow starts to spread at an accelerated rate, it will overtake ice blocks, turning them into either Purple Ice Blocks, Red Ice Blocks or Pink Ice Blocks. This will allow Pigrons to start spawning. Unlike the purple or red ice blocks, pink ice blocks will grow Crystal Shards on them. Unlike in other biomes where either golden or normal mimics can spawn (except for the Underworld) in this biome Ice Mimics will spawn.

Retrieved from "https://terraria.fandom.com/wiki/Underground_Snow_Biome?oldid=596947"
Community content is available under CC-BY-SA unless otherwise noted.