A Unicorn is a monster found in the Hallow. These monsters can run and jump very fast. It spawns only after Hard Mode; even if the Hallow is present before Hard Mode, they will not spawn. Although they are relatively common it can sometimes take a while for one (or more) of them to spawn. New Hard mode players should avoid this deadly creature. 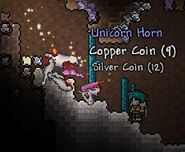 Our work here seems to be done