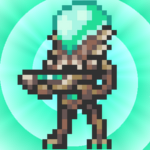 On hi there. I play terraria on the PC and the PS3. I will try to add (or correct) any information which is not added  on the wiki. If you would like to (need to) talk to me about anything please do so on my talk page.

What have I been doing lately

I have recently started a new Terraria character and world on PC, I am doing ok on it, despite not having played in a while. I'm still getting used to not having end-game weapons but I am getting more powerful.

I am now quite far into hardmode, I have defeated all 3 mechanical bosses, survived a Solar eclipse and defeated the pirate invasion. I have much better gear now including frost armour, mega-shark and the True night's edge.

Late edit: I have defeated the moon lord and have vortex armour and a vortex beater, I do not currently plan on playing on expert mode.

When did I get terraria?

Retrieved from "https://terraria.fandom.com/wiki/User:ASGTerra?oldid=596867"
Community content is available under CC-BY-SA unless otherwise noted.