Hello Terrarians! Welcome to the fifty-sixth issue of The Terrarian Bugle! Today we have lots of news to report on, so enjoy that! Following that, we'll conduct our normal weekly events, and then jump into a brief, one part series; a complete showcasing of 652Graystripe's sprites!

Brief synopsis of the following articles:

Loki recently posted yet another spoiler for the upcoming Terraria:Otherworld! 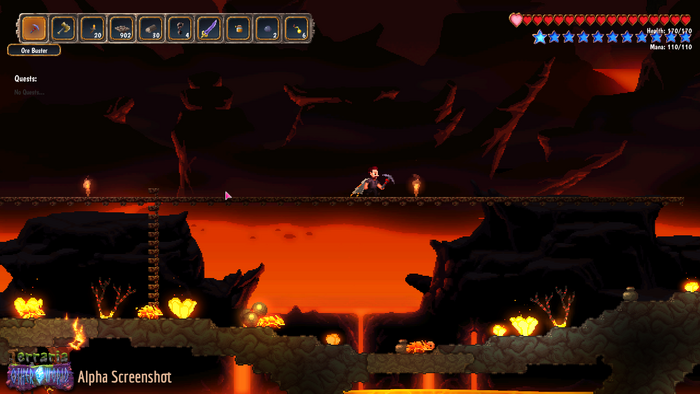 "​Hot off the presses, we wanted to share how work on Terraria: Otherworld continues heating up! Take a peek at the latest version of the new “Core” Biome. Watch your step when exploring this inferno – we wouldn’t want you to get hot under the collar…."

Here is the changelog:

"We will be releasing a rather large set of fixes and balancing changes within the next several weeks for all platforms - including Windows Phone and Amazon Appstore (more on that in a second). The changelog for these changes - compared to the current App Store (iOS)/Google Play builds - is listed below for your information. We worked alongside Re-Logic to drive a lot of these changes (thanks guys!), and we are confident they will enhance Terraria on mobile to a noticeable degree. We have additional plans in the queue - along with continuing to find and fix bugs/issues - that we will share at a later date.

Windows Phone and Amazon Appstore players - we wanted to take a second out to speak directly to you. We know you have waited a long time for all of these fixes and tweaks that have been rolling out of late to App Store (iOS) and Google Play players. This was an unfortunate side effect of the fast and furious pace with which we have been trying to gather and fix bugs, rebalance, etc. coupled with the varying submission processes and requirements across platforms - we were stuck in a catch-22 with either staggered rollouts or waiting until we had one big list to push through all at once. We chose the latter - now the great news is that the fixes below (coupled with all of the earlier fixes for the other platforms) will be submitted at the same time. In full transparency, this still likely means a few weeks lag for you guys - based on those submission processes - but it IS coming your way.

This will bring Terraria back to feature parity across all mobile platforms prior to the 1.2.3-4 content update."

Here is the changelog for this update:

Navigate here to view the full thread, which includes the instructions to access the beta that are not presented here.

In a recent post revealing the release of the open beta version of Terraria for Mac and Linux, Loki states:

We hope that you have enjoyed your first month with Terraria 1.3. The team has been hard at work - with your help - finding and smashing bugs, and we hope that we will be able to get to any that remain over the coming weeks so that everyone has the awesome gaming experience we intended. We are releasing Terraria 1.3.0.7 today - which adds support for our Mac/Linux Beta.

In parallel, as many of you know, a portion of the team - headed by Skiphs - has been pursuing the development of Terraria for Mac & Linux. Our initial plan was to have this out during the month of July. However, as we have delved deeper into these ports - coupled with seeing how helpful the community can with finding issues/bugs - we have decided that we will conduct our first ever Open Beta around the Mac and Linux versions of Terraria!

Do note that this will not likely become our new "way" of primary testing. We figured this made a lot of sense given that there is no new content to hide (1.3 is already out), and there are simply more Mac and Linux players in our community than we could try to pull together ourselves. So, we call on you - our amazing fans - to help us finish these out!

Navigate here to view the full thread, which includes a Q&A that is not presented here.

In a recent announcement, 505 Games states:

"505 Games and Re-Logic are proud to be able to finally - and officially - confirm that Terraria will indeed be coming to the Nintendo Wii U and 3DS platforms! This represents a massive opportunity to bring Terraria to a whole new set of gamers whom may have never seen Terraria before - as well as a chance to explore what might be possible in the game with dual screen functionality. We hope you share in our excitement around the potential here!

Of course, we are well aware that there have been a number of rumors and leaked information around this from various sources - so, the way we figure it, we owe you a bit more to help make this announcement even more newsworthy! Also please note that any "release dates" given out were not official.

Here are some never before seen pictures of the packaging - and we will hope to bring you some screenshots that show off some of the new functionality in the weeks to come: 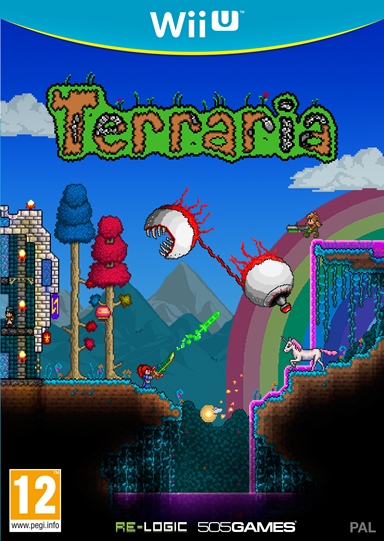 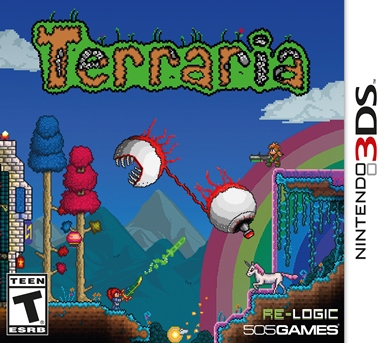 To close out our announcement, let's give you what you are all wondering - an estimate on release timing! Of course, you will have all seen various published dates based upon the earlier rumors/leaks. For the most part, these are guesses or estimates. We are sharing here today that the expected launch for Terraria on Wii U and 3DS will take place in early 2016!

We have a few more surprises in store for this coming Holiday season, but we will save those for another time. Join us in celebrating this move that will finally bring Terraria to all of the major gaming platforms!"

This poll is based on what your favorite part of the Celestial Event is, enjoy!

This week we have one submission! It is UltimaTech's natural element-themed NPC base!

(Note: To view the full, HD version of the image, click on it!) 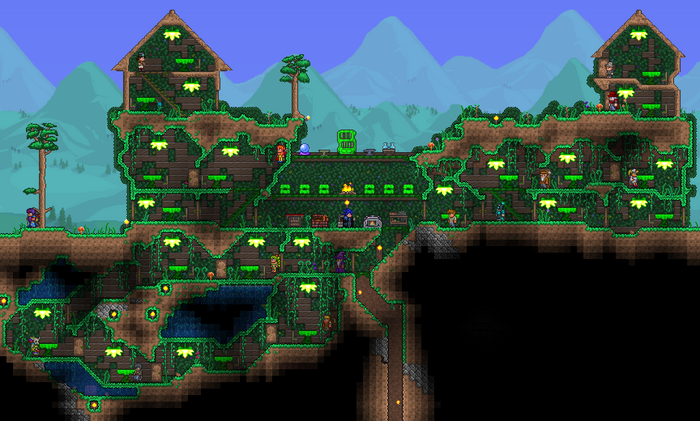 This week will be a brief, one part showcasing of 652Graystripe's sprites! Enjoy! 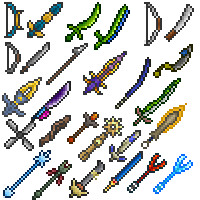 Hey guys, I hope you enjoyed the fifty-sixth issue of The Terrarian Bugle. Remember, if you have any ideas whatsoever, just let me know at my talk page and I’ll see if I can add it in. If you want your creation in next week's Creation/Pixel art section just hit me up at my talk page or talk to me in the live chat.

Thanks for reading, guys! Let me know what you think in the comments below.

Have a nice weekend and I'll see you next week. :D

Retrieved from "https://terraria.fandom.com/wiki/User_blog:TerrariamcSwaggins/The_Terrarian_Bugle_-_Issue_56?oldid=536689"
Community content is available under CC-BY-SA unless otherwise noted.