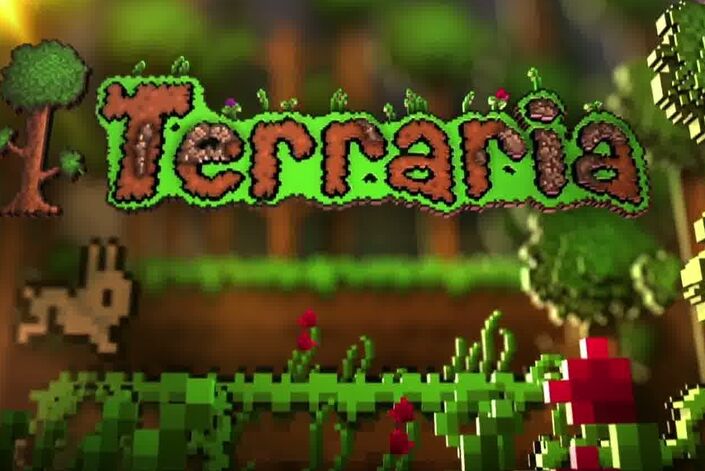 Welcome to my talk page, <insert name here>! I've been waiting for you...

I am RenzXVI, a Chat Moderator on Terraria Wiki. I help watch over the chat, ensuring the Chat Guidelines are being followed, answering user questions, and kicking or banning disruptive users.

📩 Please leave your messages below:

Hey ren....i won't be on here anymore after a tutorial squazzil gave me on how to set up a server actually deleted my main character and he didn't even care in fact i think he found it funny and if that's the kind of people that become admins on this website then i'm done on this website,goodbye it was fun while it lasted.—Preceding unsigned comment added by Afterburn32 (talk • contribs). Please sign talk page posts with ~~~~ (4 tildes).

I'm sorry you had a confusing experience setting up a server, but I did kindly walk you through the steps of running your own terrariaserver.exe. You were still having problems at this point, and I can only help so much. I'm not pleased that you somehow lost your save files while setting up the server (Although I have no idea how this occurs). I do hope you continue to enjoy Terraria, and this wiki.

Ignorance of The Rules never exempts you from them. No matter what excuse you have, your account/s used to break policies will be dealt with accordingly.

Hi I have just started and I was wondering do you have an Xbox 360 —Preceding unsigned comment added by Winter fox pro (talk • contribs). Please sign talk page posts with ~~~~ (4 tildes).

Hello sir, I see you undid an info correction I made to the Book of Skulls. I regularly create patches for Terraria, and as such, I tend to look at the game code a lot. Since 1.3.5.0 at least, the Book of Skulls is marked for 29 damage, not 28. See below:

Terraria 1.3.5.3 CIL instructions and formulated C# in Item.SetDefaults2() for the Book of Skulls:

I am sorry for the mistake, in my defense, there is no mention of a damage increase from 28 to 29 on any wiki's update history, I've checked, it's even still listed as 28 on Gamepedia. This is very strange, I had to open my game to confirm it. Thanks a lot for the edit, I have changed it back to 29. Is there a way to know exactly which update changed it to 29? Maybe you also know of a method to track that info down, that would be real useful. Thanks.
⛧ RenzXVI // Talk  // Chat // 21:34, Fri 23 June 2017 (UTC)

Reply from TiberiumFusion:
Thanks m8, no worries. The Book of Skulls has been doing 29 damage since as early as 1.3.0.3, that's as far back as my decompiled records go. TiberiumFusion (talk) 03:56, June 24, 2017 (UTC)TiberiumFusion

Sorry for leaving for awhile, I had problems with accessing the wiki for a bit. Anyways, I've noticed the wiki's changed quite a bit. Could you tell me what's happened while I was gone, and how the wiki changed? I'm a little clueless and I've actually forgotten how to edit things a bit. I remember some things, but not much. I need a little help to understand editing again.

Glad to see you again!

Yo, Just wondering, do u know anybody who could confirm my way of getting inside the Lihzard Temple?

"On mobile, it is possible to destroy the door with a sticky bomb, if a trap is under the door (needs confirmation)"

Oh my gosh, I am very sorry and did not mean to do this! I accidently chose the wrong infobox and didnt mean to change everything! Please forgive me this is a rookie mistake I made. I know it's very bad and I cannot express how sorry and embarresed I am. I feel really stupid for doing this. I am willing to accept any punishment.
—Preceding unsigned comment added by The Revanous Sith (talk • contribs). Please sign talk page posts with ~~~~ (4 tildes).

Chat has broken for me

I've tried those both multiple times but they still don't seem to do anything; same result as before. What should I do now? For the record, I have tried clearing my cache and cookies and site data.
DanZFLT (talk) 20:35, October 20, 2017 (UTC)

Quick Question,: Why did you ban me from the chat? My Brother did that (younger) and it wasn't my fault. Could you please let me back on the chat? I'll keep my computer away from him from now on.

Oh, and if it sounds like I'm blaming my brother, I'm not. I'm just letting you know who did it.

When a suspect is arrested because his car had a gun in it, he is sent to jail even if it is literally his brother's car and his brother's gun, he's the one who is driving around with them so he gets punished. I have banned your account so that your little brother or sister or father or mother or Santa Claus wouldn't be able to use your account to spam anymore.

By the way, your little brother was NOT your excuse when you spammed, you even said "lol" after the spam and then you stated the reason why you spammed, it's also an invalid reason because you get the long message warning even without sending the message, you did NOT need to post the spam. It's sad how you think these excuses will work, all it does is make you a liar and make your IQ look low.
⛧ RenzXVI // Talk  // Chat // 22:40, Tue 5 December 2017 (UTC)

Renz, why did you delete my changes on the EoW and BoC? It happened to me once. Maybe you could put them back and say "(not confirmed)"? But it did happen.

Are you serious? This has to be explained? I already put it in the edit summary. The Crimson and Corruption bosses are supposed to spawn after you break three of the orbs/hearts. It is not a bug, it is a game feature.
⛧ RenzXVI // Talk  // Chat // 20:41, Mon 11 December 2017 (UTC)

(EDIT: this is GingkathFox, didn't realize I changed my signature) Hey Renz! sry I haven't been on chat, I've been busy T-T

Anyways, shouldn't this go into the "bugs" section?

Your signature SHOULD have a link to your userpage and/or talkpage with your name on it. People shouldn't need to look at the edit history just to see who wrote the message and they also shouldn't need to manually go to your talk page to reply, that would be disregarding the point of signatures.

Sorry I had to leave chat, my dad was watching the cavs game, and I had to go to bed after.

Hi, Squazzil here,
The Platinum Watch is crafted at a table and chair, so if you aren't close enough to those items, it won't show up in the crafting. Also for future reference when needing to research what crafting station you need, you can find it in the drop down "Crafting" section of the infobox on the page you are looking up.

What do you mean it doesn't show the chat when scrolling down? Do you mean when you are on the chat already you can't scroll to read messages? Or do you mean this chat box is missing or broken on the wiki?:

It's not the chat, it's the commenting section.

P.S., Thanks for the info Squazzil.

Hi, could you please add this image on the Onyx Blaster pg?

Hey, sorry for double messaging you like this, but I think you might want to add these images on the Sky Fracture and the Spirit Flame pgs.

Mere hours after saying that I found one... 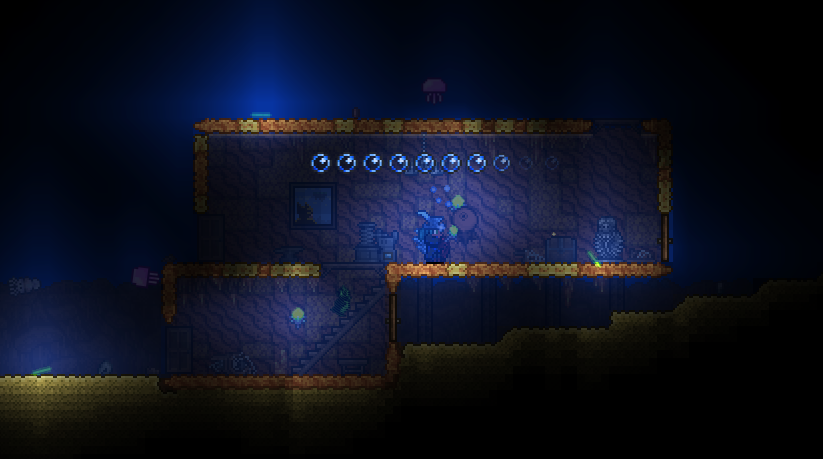 Not sure why you'd go through the trouble of trying to disprove the validity of an underground house, but I have done research regarding underground houses and have found no other user on the official forums claiming to have found any ocean bottomed houses, nor any other really strange house for that matter. Nor is there any mention of it on the official forums. The way I deal with information that can't be confirmed (much like bugs), is that I don't include it in our information. You have added many images that can't be confirmed. Anyone can build these things themselves and use game editors to add the in game sprited details. This is why I need official confirmation before these houses will be added.

Is it's existence a bug? Maybe. Most of the worlds I've been on DON'T have an ocean where the floor goes below an altitude of 2. Underground Houses seem to need an altitude of -2 or more. Also... they look like Desert houses in every possible way, except having a wood chest. Also... NO you CAN'T make a desert house, since the background wall used in the randomly spawned ones can't be built, as I noted when I built that table about what the various types of houses are made of. My personal guess is that they're meant to be hardened sand and sandstone walls, but you can't MAKE or collect walls made of those materials. At least not in ver 1.3.3. --Marhawkman (talk) 19:30, February 5, 2018 (UTC)

This is what mods are for, to build things normally not possible in the vanilla game, that's why I mentioned editors. It's not really up for debate, and shouldn't be made into a big issue. Other sources don't have these houses, I don't want them in our official information pages.

Retrieved from "https://terraria.fandom.com/wiki/User_talk:RenzXVI?oldid=590637"
Community content is available under CC-BY-SA unless otherwise noted.