The Vampire Knives is a weapon that was added in the 1.2 update.

They can be found in Crimson Chests, which can be found in the Dungeon. In order to open the chest, the player will need a Crimson Key. The Knives do not go forever, when standing still, the Knives will spin and fade just outside the screen.

As the weapon does melee damage, the Beetle Armor set will apply damage bonuses to it along with any other accessory or armor set that boosts melee damage. Such as Solar Flare Armor or a Fire Gauntlet.

A portion (~7%) of the damage dealt will be returned as health to the user. The knives can hit multiple enemies or hit a single large enemy multiple times. 4-8 Vampire Knives can be thrown at a time. For example:

One of the Knives hits an enemy and deals 90 damage, but 7% of this damage (i.e., 6) is returned to the player as HP. This permits effective invincibility, due to constant healing — as long as the player continues to throw the Knives. They are capable of healing almost all damage inflicted to them fairly quickly.

The Knives have a huge, and seemingly random spread, making aiming them all very difficult. Despite this, it's fairly easy to survive most encounters and out-heal any damage that may be received. Especially from bosses, where the lifestealing properties of this weapon can be seen in full effect.

However, continued use of the Knives can be extremely disorienting with all that's going onscreen. It can be difficult to discern where enemy projectiles or ranged attacks may be, and the player could die from not being able to see their character among the knife storm and healing beams while they are dealing damage.

If using a Mage, Ranger or Summoner-based armour and accessory loadout, the Knives aren't a very effective healing source since they won't get enough of a damage boost to be healing more than damage taken (1 or 2 per knife) as compared to if you were using them with a Melee-based loadout. (2-4+ per knife).

Also, the Moon Bite Debuff from Moon Lord will disable the healing from Vampire Knives rendering them entirely useless. 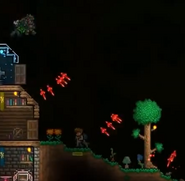 The Vampire Knives being thrown. 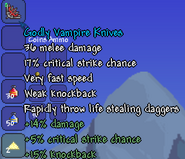 Vampire Knives with Godly prefix.
Add a photo to this gallery
Retrieved from "https://terraria.fandom.com/wiki/Vampire_Knives?oldid=599446"
Community content is available under CC-BY-SA unless otherwise noted.