Desktop/Mobile-Only Content: This information applies only to the Desktop and Mobile versions of Terraria.
Void Bag 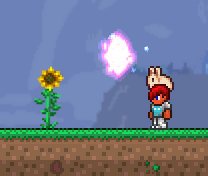 When used manually, the Void Bag functions similarly to the Money Trough, providing a temporary point of access to the player's Void Vault that lasts for 3 minutes. The item is not consumed and can be used limitlessly.