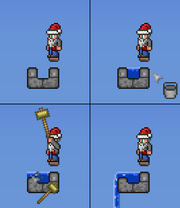 How to create a waterfall.

Waterfalls are visual effects only; they do not drain anything from the liquid source, nor do they have any effects on players, creatures, environment, or furniture; however, lavafalls will emit light like lava. Therefore, players will not drown if they are under a waterfall, will not be inflicted with the On Fire! debuff and get damaged in lavafalls, or get the Honey buff in honeyfalls.