Weather is a concept which was touched upon in v1.1.1, but fleshed out in v1.2. The Weather Radio accessory allows the player to see the weather conditions from any location on the map.

At most times and in most biomes, the Sun will be shining and the weather will be clear. Under these conditions, monsters spawned will be the default for the biome the player is in.

Sometimes in a few biomes wind will start to make leaves blow off trees, make trees and plants sway in the wind, the music will change to the Windy day event music, and the Sun will be shining. During the Windy Day event, there is a chance to find Windy Balloons which are slimes tied to balloons, and when the Windy Balloon hits the ground it will become a slime.

Occasionally, in any biome but the Snow Biome, it may start raining. The rain can vary in intensity from light rain to heavy. This change in weather is accompanied by a steady decrease in lighting and a change in music, which overrides the default music for every surface biome except the Crimson, the Corruption, the Jungle and Snow Biomes.

During the rain, normal biome monsters will spawn alongside Umbrella Slimes and Flying Fish. After Hard Mode, the Angry Nimbus will start to spawn. At night, Demon Eyes may spawn wearing rain caps while Zombies will have a chance of spawning in Rain Coats and Rain Hats (these are Vanity Items which have a chance of dropping). Additionally, Goldfish will be able to walk around outside of the water during a rainstorm.

When the player is in the Snow Biome, it will always be lightly snowing. This is purely a graphical effect, and also has no effect on mobs spawned. However, when it would be raining in other biomes, Snow Biomes will be affected by a blizzard instead. In blizzards, players will encounter the Ice Golem (after Hard Mode), along with the other monsters that spawn during rain.

Sandstorms occur randomly in the Desert biome. This weather condition is accompanied by a change in music. The background will also become solid and dusty looking. The effect is similar to a blizzard, but with sand particles blowing strongly. The debuff Mighty Wind will be active and it pushes the player slowly in the direction of the wind. The player's movement will be slowed down when attempting to run against the wind, or sped up if moving with the direction of the wind.

Exclusive enemies as well as some underground enemies will spawn for the duration of the storm.

When it rains, Zombies wear raincoats

A blizzard and a Full Blood Moon at the same time 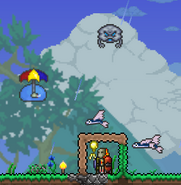 Gold fish walk on land while its raining

Two angry tumblers chasing the player during a sandstorm.
Add a photo to this gallery
Retrieved from "https://terraria.fandom.com/wiki/Weather?oldid=603327"
Community content is available under CC-BY-SA unless otherwise noted.