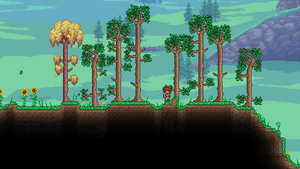 A character present in a Terraria world (forest biome).

An initial Hardmode world as shown with a map viewer.
This article is about world creation and structure. For world size measurements and advantages, see Map size.

The term world refers to Terraria's virtual world system which all of the gameplay takes place in. The world holds the entirety of the game content, such as items, enemies, objects, and so on. Terraria worlds are two-dimensional and navigated in a platform game-like manner. World appearance is subject to some settings.

The term map is partly synonymous with world but also refers to the minimap, the in-game map system (not to be confused with the big map that takes up the whole screen). 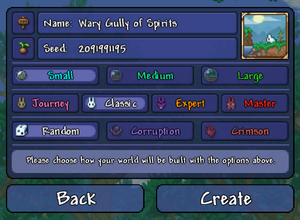 Worlds are created and accessed in the game's main menu. After selecting single- or multiplayer and a character, the player is provided the options of selecting (for playing) already created worlds if they have made any, creating new worlds, favoriting worlds, integrating worlds with their Steam Cloud in order to easily access them on different computers, and deleting them.

World name and seed may be randomized by selecting the button with the icon.

World creation is finished by pressing the "Create" button. It is followed by an automated process which generates a random world (if world seed is not used). This seeks to ensure that no two worlds are identical, allowing each new world to be a somewhat new experience. The perhaps largest difference between worlds is some of them having the Corruption whereas others have the Crimson. Each of these evil biomes offer a player unique materials, enemies and drops.

Only one world can be accessed at a given time (in similar fashion to how the player may only control one character at a time), but the player is free to create as many worlds as they can store on their device or computer. Characters are not locked to worlds (with the exception that Journey Mode

characters can only enter worlds on Journey difficulty), so it is, for example, possible for an end-game character to play in worlds that have not made that much progression, or to bring resources from one world to another.

Since the contents of a character's inventory, Piggy Bank, Safe, Defender's Forge

A given world can be used both for single-player and multiplayer. In case of the latter, the world is used to make a server (see Guide:Setting up a server).

When entering a new world, the character will appear at the world's spawn point, usually on the surface close to the horizontal mid-point of the map, with an in-game time of 8:15 AM. A character's individual spawn point can be altered using a Bed. If the player dies, or teleports using a Recall Potion, Magic Mirror/Ice Mirror

, they will return to their spawn point.

World exit is typically done through the settings option that appears when the inventory is opened (see Game controls), though this depends on game platform.

Worlds are structured into layers and biomes in order to provide various content depending on the player's location. World content is also provided through a range of time-based events like invasions, nighttime, boss battles, etc. The world states of pre-Hardmode and Hardmode also determine what content is available. The world's biomes and layers, time-based events, and Hardmode are designed to gradually become accessible as the player becomes more skilled and the character stronger. This progression gameplay can pose a unique challenge in multiplayer, as one player could progress more quickly than the others, only to find themselves with a weak team during difficult battles.

have exclusive content not found on other platforms, and vice-versa.

During the creation of the world, the player may opt to let the game create a random name for the new world by clicking the sign icon to the left of the name field. It will then replace the text in the field with a random name that is created using the schema below. The name will never be longer than 27 characters.[1]

The game will pick a random composition and random adjectives, locations, and nouns from the lists below. The first two compositions are twice as likely to be picked as the others.